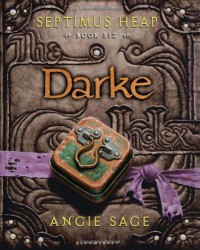 When the novel Magyk by Angie Sage was first released I picked it up tentatively and read it through. I was impressed with the humour, worldbuilding and zany characterisation that the author invented. Of course, I was much younger and less mature, more open to accepting anything as fine literature, so part of me wonders how I would view Magyk now, through more experienced eyes. Unfortunately any novel concept, no matter how novel or within a novel, must eventually wear out. And by this sixquillionth entry the ideas that made Magyk magical wore out for me.

Firstly, it so happens that I perceived the oddly distanced way the author writes her story (I believe it may be a form of third person omniscient narration, but it's an odd form - some kind of mutation) as rather grating. It might be that the repetition of characters (and to some extent plotlines) has become stale - much as what happened with the Artemis Fowl series. The best YA/children's fiction novels are capable of maintaining a subtlety and a strength beyond multiple novels and know when to quit while ahead, leaving the audience wanting more but never bored. Unfortunately Darke created an atmosphere of the latter, rather than the former. Not that this is necessarily a true reflection on the novel, but considering that this is the sixth entry and the plots are starting to recycle previous ideas... Well, you can work out the rest.

Since there was a firstly there must also be a secondly. So, secondly, it also happens that this appeared to be another children's fiction novel that told me what was going on, rather than showed me. Hence breaking a golden rule of fiction. Unfortunately so many children's fiction and YA fiction authors seem to break this rule and it detracts from the overall quality of their story. Do not tell the author that a character was in peril, unless done on occasion or for the sake of humour, show how the character was in peril. There are some authors who can get away with it for me (see The Hunger Games or Divergent) but for the most part it weakens the ability of the reader to fully engage with the novel's world. The reason for saying 'show don't tell' is not to impose rules on authors but rather to help create a stronger quality of story overall.

Darke features a whole lot of arguing, running and pointless moving about to create conflict in the story. That said, so do most adventure or fantasy stories, the point is that this novel does not feature these actions in a particularly impressive manner. It makes them out to be pointless actions, for pointlessness's sake. Of course, one could perhaps read this as an absurdist comedy fantasy novel but it doesn't work particularly well as that either. The novel is too one paced - it rushes here and it rushes there.

So, by now you can tell I didn't particularly care for the novel overall. Of course the imagined rules probably state that I should give this a full five stars for the author's sake but I imagine that my discontent doesn't particularly affect her one way or the other considering the 4.22 average rating and the 'bestseller' status of this series. So I'll voice my discontent heartily, and let others voice their contentment. Because sometimes, with literature being content is not enough for me as a reader, and when it comes to this odd volume I am not amused.