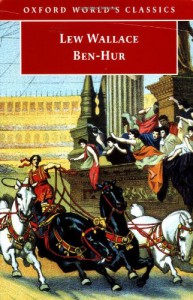 "Out of that vast tomb Christianity issued to supersede the Caesars."

Ben Hur is one of those classic works better recognised for its many adaptations. To this end it seems fair to compare it to another highly similar work - Les Miserables. Both are classic historical fiction works which use history to spread themes and ideas about humanity as a whole. Both novels also regularly divert from the storytelling to provide detailed insights into history. This is perhaps where Ben Hur is stronger than Les Miserables - in that as a novel it works historical detail better into the plot. However, Les Miserables' message of grace and redemption holds as much power as this tale, if not more.

If you've failed to see the famous and equally classic Charlton Heston 1959 film of this novel then you would be in the minority. There are very few individuals without some knowledge of the film's story and plot - a grand sweeping tragedy that comes full circle and moves the character Judah Ben Hur from prince to slave to prince again. The book is no different, though there are perhaps elements better highlighted in each version of the tale. There is a well-portrayed sense of a love triangle within the novel, for instance, that is not there in the film. However this love triangle exists purely to work a contrast between love and death and love and duty.

It is powerful how Lew Wallace worked his novel to feature ideas that could be linked back into his modern times. Firstly, there is the internal and consistent religious/Christian theology and debate that ensures within the novel, a line of inquiry that vanishes from the 1959 film, to be replaced with other equally strong motives. The way in which Wallace writes about the disparity between the different 'racial groups' of his novel - the Romans, Greeks, Israelites, Arabs, Negroes and Egyptians - possibly works as a form of social criticism of his own era. There is the point made that the Jews live in bondage under the Romans and are treated as much inferior people. This in turn reminds one of how African Americans were treated during the 1880s and beyond - as an inferior group. One can perhaps wonder whether Lew Wallace is observing the differences in the way groups of his own time interact and are treated and working them into his novel. Indeed, when it came to freedom and slavery (key themes within this novel) Wallace "claimed, 'In the nature of things Freedom and Slavery cannot be coexistent, and if Freedom is lost the Democratic party is responsible.' To him, the presence of some slavery made it impossible for true freedom to exist anywhere within the country." (1)

"Down Eros, up Mars

Essentially, Ben Hur is a novel of many contrasts, epitomised by this quote made famous through the film. It is a novel of revenge versus love, death versus life, kingship versus servant-hood. It is a novel of all the things that compose Christianity in many regards with how Christ came and turned many things upside down in that regard. Ben Hur is compared to the journeys of the Romans around him and serves to show the effect of Christ upon a hate-filled individual. He is particularly compared to his friend Messala. On the other hand Esther is compared to the Egyptian, with the differences in love and respect for their parents particularly noticeable. Then there is the overall comparison of Roman rule when it clashes with Jewish rule or law.

Ben Hur is a great tale, and it is a real testament to its greatness that it has survived through the years and in many forms. As with Les Miserables it is a must read historical fiction classic. Though there are periods at the beginning of the novel that serve as slow exposition and could cause the reader to lose track of the plot the novel itself is a masterful fiction work. Leave behind the pseudo-historical fiction works of the modern mega selling authors and the fantasy worlds that enthral modern readers. Ben Hur is the equal and better of any of them, though it may not suit one's modern taste particularly well, as some may note the difficulty of being forced to keep focused on everything within the novel. Give Ben Hur a read, and down with Mars, down with Eros and up with true love.
Tweet