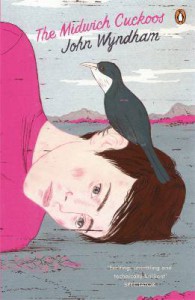 The Midwich Cuckoos is part sci-fi and part horror story with a greater emphasis on the sci-fi elements. John Wyndham with this tale, in combination with The Day of the Triffids and The Chrysalids, has cemented a place on my list of all time great science fiction authors. His works are both entertaining, well written and enlightening. They are a complement to the reader and no doubt many later writers have been inspired by his contributions to writing whether they realise it or not.

The Midwich Cuckoos follows the extraordinary event that occurs in the small town of Midwich. On the 26th September to the following day a strange object causes the inhabitants of the village to fall unconscious and to wake a day later. After this strange event all the women in the village of a child-birthing age fall pregnant. Only it turns out the children birthed through these pregnancies are superior non-human entities. I loved how Wyndham alluded to the fact that husbands in the village threatened divorce upon their wives for being unfaithful. It added a sense of the comic to the book.

Unfortunately I believe that, modern film makers being what they are, where this to be turned into a major film I can see the themes of this book being twisted to serve a kind of pro-abortion message. And I'm always against film makers turning a book into a propaganda machine in such a way. The book as it is has a much greater message. It analyses what it is to be human and the sanctity of human life. The Children born in Midwich are alien, outsiders and yet were still born the natural human way. In this way I believe Wyndham was creating an entertaining novel that questioned what it was that makes us human by comparing the people in his novel to the clearly alien Children. I'm not going to state what I think the answer is as seen in the novel or as I perceive it - I'll leave that to the readers to find out.

Any flaw in this book would be more to do with the dialogue or the fact that it came from a different era. However it still is a book entirely readable and relevant today. And conceptually Wyndham is brilliant, certainly up there with Wells in this type of classic sci-fi (he even refers brilliantly to Wells in his novel about aliens and how the Children are an invasion of another level - perhaps you could even take this book as Wyndham writing about the invasion of ideas and concepts like Soviet Communism at the time?) Either way this is a novel that deserves to be read now and by future generations.
Tweet