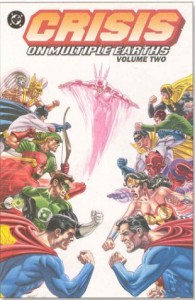 I cannot say I'm a fan of the two Crisis on Multiple Earths volumes that I've read. They read as a relic from an age of comics best left forgotten and a reminder of why Marvel triumphs overall for me. Whereas DC is the amalgamation of various comics, ideas and characters being mixed together Marvel has always had a more planned and structured world with its characters meeting according to that plan. These volumes are very much a by-product of a lack of planning and appear more commercial, sucking the reader in with their gloss rather than their quality. And sadly it shows up over time.

It's comics like these which give the graphic novel genre a bad name in general. The reason being that they lack quality and depth and as a result aid the stereotypical idea that comics are dumb entertainment. Fortunately the rise of acclaimed novels like Gaiman's Sandman (which I have to read in the future) and Watchmen have shaken the overall stereotype while superhero films again swing the favour back toward smarter superhero comics being required for the reading audience.

Let me explain why I think this is a sad graphic novel. Firstly because it feels like it removes any sense of intelligence, secondly because it appears highly commercial in nature and thirdly because it fails to execute strong ideas. The characters here lack the definition provided to them in recent years and the idea of the parallel Earths was used as a gimmick with no defined rules. You could almost hear the author's thoughts:

So our readership wants to see the mighty Justice League in trouble? We'll use magic or celestial energy beings. Or even better we'll give them unstoppable enemies and then find some undefined way of vibrating the Justice Society/Justice League back and forth between Earths. Oh, now the plot is too predictable and boring? We'll kill Wonder Woman and Superman (and we'll do it again later when we revive them).

In other words this was poorly written gloss without substance perpetrating as quality entertainment and filled with so many deus-ex machina bridged plot holes. I'd encourage others to look elsewhere for entertainment in graphic novels before they even think of reading this.
Tweet