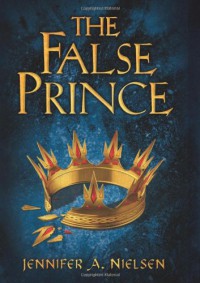 The False Prince may not be the most revolutionary fantasy concept however what it does is execute its premise to perfection. Where the tendency for YA novels has been to patronise the reader Jennifer Nielsen's novel is instead a remarkably mature work of fiction that does not resort to comforting or helping the reader along. There is relatively little 'infodumping' and what 'infodumping' exists is brought about through the plot. All of which leads to a remarkable beginning for a series.

Like most YA novels the prose is hardly a beautiful flowery revelation of an enhanced vocabulary. However what the language does is, through its relative simplicity, work on a subtle level to provide its page-turning narrative. In fact, like (the perhaps slightly more mature) [b:Theft of Swords|10790290|Theft of Swords (The Riyria Revelations, #1-2)|Michael J. Sullivan|http://d.gr-assets.com/books/1307959785s/10790290.jpg|15702572] this is a novel that draws the reader in through its tightly wound plotting and its brilliant characterisation. In fact this is a novel that an aspiring novelist should examine to learn how to create a likeable roguish character, a character who uses convincing witty banter. In fact the use of humour in the opening few paragraphs, combined with the first person perspective serve to create the perfect set up for a novel.

The plot itself follows Sage, an orphan and thief who ends up in the tricky predicament of being bought by Conner, a regent of the kingdom. Conner has been gathering orphans who resemble a lost prince in the hope of training them to become princes and save the kingdom. In short the plot is a reverse twist on the old 'Prince and the Pauper' tale. Further, much of the tale is driven along by the intrigue and the lies told to the main characters, supposedly keeping the reader from working out what is truly going on. That said the final reveal was seemingly obvious but executed in a fascinating way.