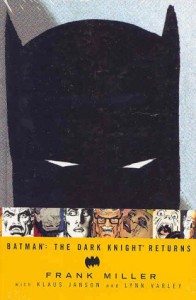 Before Christopher Nolan came alone and further redefined the idea of superheroics, Frank Miller was doing well enough to keep Batman fresh and interesting in his own way. The Dark Knight Returns tops my list of best graphic novels ever written for what it did for the genre, what it did for Batman and what it stands as today. Though [b:Watchmen|472331|Watchmen|Alan Moore|http://d.gr-assets.com/books/1327866860s/472331.jpg|4358649] is universally accepted as the greatest graphic novel I personally believe this is greater in that it was written previously and from what I've read appears to have 'opened the door' for Watchmen to become so accepted.

This is not the glossy Batman of the television shows, movies or recent comics. This is the ultimate representation of Batman as the Dark Knight. As a man straddling the line between hero and vigilante, as a man with a dark past he keeps running from and with villains who rise up against his heroic light. He is a man who keeps running from his past but can never escape the fact of the legend and icon he is. No wonder recent Doctor Who writers noted that there was a sense of Batmanification about the Doctor's latest incarnation. In short this novel fully explores many of the deep philosophical and psychological aspects of who and what Batman is as a symbol.

Essentially this is a semi-dystopian novel in graphic form. A tale of what happens when governments allow crime to run rampant, when superheroes are outlawed and when the Batman returns. Because essentially that is what the Batman is, a figure outside of the law who can do the things the law should but cannot.

The artwork is not neat or beautiful as some artwork is. But it fits the story perfectly, providing a further dark, gritty and rough edge to complement the plot. And that is what strong artwork should do in a graphic novel, it should fit the story rather than try and bedazzle the reader into believing the story is strong. Frank Miller certainly appears to have understood how to make a piece of art which is edgy and gives you both barrels in its artwork and story.

The story features an older Batman returning to action in Gotham - hence the title. But this is a Gotham devoid of the heroes of the past, this is a Gotham where heroes do not live. This is the dark incarnation of Gotham, a city of crime. And therefore Batman returns, a legend come to haunt the criminals of the city. And rising up alongside him is a new, female version of Robin.

The real theme of the story explores the idea of the hero or the vigilante. It questions whether, when evil and similarly chaos arise, a hero and order also arise. In the case of this novel, this hero is naturally Batman. The question is also raised that when one devotes oneself to fighting evil so incessantly if there is a cost, and the idea that Batman is a man who fights on only to keep running is again brought up.

This is a masterpiece and if you are into graphic novels a must read work. If you are wanting to begin reading Batman, here is as good a place as any to begin, because Frank Miller (genius that he is) takes the essence of what Batman is and spins it out into a new and gritty setting, while also exploring deep themes. In this regard this work is literature because it combines thematic expression with imagery.
Tweet