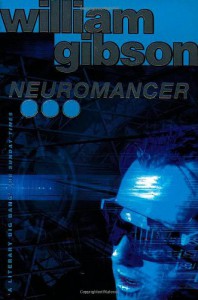 This novel I wanted to like once I heard about the idea. It sounded cool, it sounded great. After all it is considered one of the better science fiction novels and defined the idea of cyberspace. Perhaps it was simply me or perhaps the novel is more dated than others of its type. I simply could not enjoy it. However I will admit that the idea is potent and that Gibson's ideas about the future were highly interesting.

However what I did not like stood out most strongly in this work. What I did not like was the classic issue I have with all books that attempt to be dark and gritty: 1. overuse of swearing/sexual references and 2. the cluttered language.

1. The novel certainly overused many swear words in my opinion. And whenever that happens I honestly dislike it. I personally won't use any with sexual connotations simply because while they are accepted nowdays I have not forgotten what people really mean by them. In this book the overuse of such words merely makes them lose impact. I personally don't mind authors using those words (it is a personal choice) but can they at least use them relevantly? If everything from a goat to a book is 'damned' then the word has no more meaning than totally in the phrase "totally cool man." All I'm saying is please don't overuse them because it is a waste of language really and it just clutters the novel with unnecessary words. The best gritty work I have read used language with potent impact (read for instance Ludlum's Bourne novels and the way he handles language. It is gritty without overexertion.

2. The novel also used too many cluttered phrases for me. It didn't flow for me and felt disjointed. As a result I had a hard time following the plotting. I got there in the end of course but it didn't connect with me in the way say the gothic brilliance of Edgar Allan Poe would. Perhaps it was just my fondness for flowing, classic language but I really didn't appreciate the compact style of Gibson as I might have. And there was also a lot of unexplained technical jargon, again getting in the way of the story.

Anyway while I may not like this others will. Certainly from among my friends who have read this it appears hit and miss with more hits than misses. But for me this is a miss that will become number seven on my one star list. And I do hate to give any book I finish one stars... But to quote Ned Kelly (apparently) "such is life."
Tweet