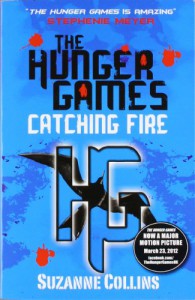 Her Hunger Games reminds me of the public spectacles the Romans threw to remind everyone watching that the Emperor was in control. It reminds me of the Russian and German governments of the 1940s how they used mock trials as propaganda. Basically through holding these games the President of the Districts holds total power over the world in many ways. It's his way of manipulating the world to doing his bidding.

While, from memory, the second and third books were not as enjoyable as the fist I still enjoyed them because they really delved further into the aspects of the world that were dystopian. They also introduce the revolutionary aspects.

So kudos to Suzanne Collins for writing an entertaining YA series which is smart and full of interesting ideas. For me at least. And for also becoming a bestselling author too. Having read her Gregory books when I was younger I love the fact that she makes an action packed, entertaining read. One that not only I can enjoy but also my mother.

Having re-read Catching Fire in the past few days it has struck me that this is a book which, while hardly the finest written novel of all time, is still of decent quality. However as a sequel it slightly lacks in terms of the punch and compulsivity of the first novel.

I find that the enigma of this series is in how it can be so entertaining to read and yet focus around a plot which challenges our enjoyment of violence in media and reality. I give Suzanne Collins credit for her ideas and for an uncompromising, fascinatingly un-patronising YA fiction novel.

Where many people comment about how they dislike the first person narration and the present tense I personally must state that for me, that is something that actually works in the writing. I like having a narrator who talks about what she's going through as she's doing it. I like a narrator who is unlikeable and unrelatable. It just further confirms the idea that the world of Panem is one which turns its characters (all save the nicer Peta) into tough, brutal individuals. Its only with the sympathetic characters like Prim that we actually see that Katniss' un-likable nature is a facade. A mask, like the others formed by wearing pretty dresses designed by Cinna. Speaking of Cinna I find him a fascinating character (as his first year as stylist he comes into the games and, I believe he requests the girl from District 12 as part of his plan to rebel). It is interesting how through Cinna art (in fashion) is shown to have the power of rebellion.

I do find it fascinating that Suzanne Collins takes many Latin names (several from The Iliad in fact which I was also reading at the time) for her world. It suggests the link of history repeating itself and the idea that perhaps the characters in her world are meant to be archetypes drawn from mythology to represent a struggle of good and evil. Some may say the morality is too black and white but I disagree. There are many shades of grey in this world, a world that forces its likeable characters to kill or be killed.

As for the repetition of this book? The fact that it features a second Hunger Games. Some have said that it is a 'cheat' of the author. In many ways they are correct. But then again all works of fiction are cheats of the author. Some hide it better than others. That said I also think the way in which this second Hunger Games kicks off fits in perfectly with the book's own internal logic.

If you've read the first I encourage you to continue on with these. Maybe you won't like them, maybe you will. However it should be up to you to decide that based on what you find in the books.
Tweet