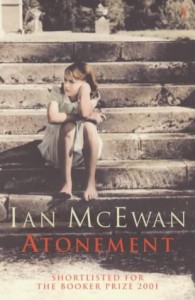 'I had written him a letter which I had, for want of better
Knowledge, sent to where I met him down the Lachlan, years ago,
He was shearing when I knew him, so I sent the letter to him,
Just "on spec", addressed as follows: "Clancy, of The Overflow"'

To borrow the opening verse of a famous Australian poem by Banjo Patterson, this is precisely what parts of Atonement feel like. A letter, written and directed to relatives wrongly accused in the hope of seeking forgiveness or at the least: atonement. Atonement is one of the finest modern literary novels I have read, lyrical and hauntingly moving, while captivating the reader with an interesting story. As for the ideas behind this novel, they are profound. I believe this book alone is one which should class McEwan as a writer deserving of acclaim.

I noted in the previous McEwan novel I read how McEwan had written in the first person present tense. In Atonement his writing is still a beautiful, if not more beautiful, but set in the third-person. And personally this works better in describing the events of the story. By the end of the novel the narrative does drift into first person, but only as necessary for the story's completion. For by the end of the novel the reader will see that this book is 'not written' by McEwan but rather by Briony Tallis herself as her testimony of a wrong once done. I thought this method of having Atonement be something of a book within a book was a brilliant meta-linguistic technique. Of course I did not recognise this until the end of the novel, which is when McEwan wanted his readers to see this fact.

The novel focuses on Briony Tallis, a thirteen year old in 1934, who could perhaps be described as capricious and wilful. She wants the world to run according to her designs (as any thirteen year old does) and is a budding author, having been in the process of writing a play. This introduction to Briony perfectly places her into the narrative as a naive dreamer, a girl who sees black and white and then argues what she sees.

At the story's opening Briony Tallis spies her sister Cecilia strip down to her underwear in front of one particular boy, Robbie Turner and so begins a dreadful misinterpretation, particularly when she reads a smutty letter from Robbie to Cecilia, as Briony suspects Robbie of committing wrong against her sister. This belief is confirmed to her when she finds Robbie and Cecilia in the library making love. When Briony's cousin Lola is raped, she reports that it was Robbie who did the deed, though he claims innocence. And so Robbie, one a 'family friend' is separated from his lover and a once loving family because she believes so clearly that it was Robbie.

The themes of this novel essentially resolve around the conflict created from Briony's mistake. The question is asked subtly by the novel: can anyone be forgiven or make up for a mistake made as a child? The question is not should they, for I think that most people would believe that yes, an individual should be forgiven if they are truly sorry for their mistake. But the question asked is 'can they be forgiven?'. Another aspect of McEwan's brilliant writing is that he does make complOvex and solid characters in this novel who respond not to fairytale logic but rather who respond as emotional individuals. And as emotionally driven humans there are some crimes and some wrongs that we never want to right or forgive. Personally this element touched me due to my beliefs in God and that we all need someone who can unconditionally forgive, because I do not think that we as people can forgive every detail of a crime done against us. Or we may pardon them but never forget their mistake. We will allow mistakes to colour our perception of individuals. And from this perspective this was a great book, along with the writing, the characters and the overall story.

Overall a piece of literature that deserves to be read and has been read by many hundreds of thousands of people. It's a potential classic in the making and certainly has to be McEwan's best work in writing. I encourage anyone who is interested in stories about unfair accusations and forgiveness to give it a try if they have not.
Tweet