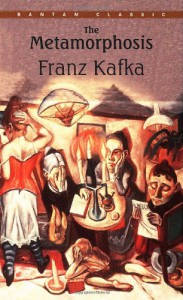 I don't know quite what to think of Metamorphosis. I did enjoy it, it was certainly an interesting and well written story yet it was - to say the least - incredibly weird. I may perhaps just not be used to the tone adopted by Kafka as this was the first work of his I have ever read.

"As Gregor Samsa awoke one morning from uneasy dreams he found himself transformed in his bed into a gigantic insect."

The very first sentence practically provides and instant synopsis of the text. This makes it all the more invaluable, yet sudden. You don't see here how or why Gregor has mutated into a giant insect yet that doesn't matter.

In fact it becomes quite obvious that Kafka never intends to reveal how Gregor became an insect. He leaves that to the imagination of his reader. It is not important in his eyes. The transformation is a device to discuss various issues. The issue of identity and how human identity can experience a metamorphosis is one for instance. In Gregor's case his change erodes the supposed love of his family until they see him as nothing more than an animal that they have fooled themselves into believing is Gregor. Kafka thus reveals and explores the sense of alienation and hatred that is expressed for a person when they transform in some aspect.

I found myself questioning whether - as in the case of An Inspector Calls - the characters around Gregor truly cared. For in the end - like in Priestley's play - they resume their normal lives and come to hate the creature he has become. Is that a hypocrisy to speak of loving a person and yet ignoring them?

I recommend this for anyone interested in short stories with morals behind them. Kafka's work here reminded me of Anton Chekhov, whom I also love, in many aspects being equally interesting and inviting for me. This appears to be a classic text well worth reading, discussing and studying.

After further study I observe that the true brilliance of this work is that you can analyse it from any perspective. It can be critiqued as a feminist work, as a prediction about the future and as a tale of alienation. It could be seen through a social-Marxist view or as a psychological tale about the author and his family. But whatever the view it is a highly interesting novella with many interesting questions inspired by it.
Tweet