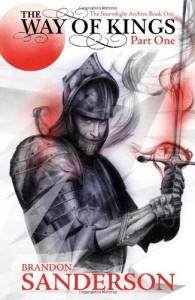 This, though only part one of an entire book, was so epic that in itself it gains five stars. I don't believe I can name any other book - well apart from the magnificent Lord of the Rings - that while divided in parts retains its pulling power.

The world Sanderson creates is astonishing, populated by larger than life heroes, some anti-heroes and basically human beings who have varying motives for doing what they consider moral. Its an intriguing and satisfying world that drew me in and left me wanting more. Well it was only part one of a full novel.

The power of this work shall be elaborated upon further in my review of the second part. However it shall suffice to say bow that Sanderson may have one of the great epic fantasies on his hands here. So long as he knows how to properly conclude it. Yet for now this stands superb.

It has action scenes so brilliant they leave you racing through pages; it has mysterious spirits; supernatural powers abound; political movements and ceaseless - and almost pointless - wars; religious movements; intrigue and above all depth. For Sanderson creates a world here rather than simply paint a thin veneer for the reader to skim and admire. No he fills a world with such depth that the characters almost breathe, that you feel for the decisions they must make, that you question their motives and dealings. Yes this is a great work. Although I am yet to finish this as it stands.

Fully worth reading and perhaps (if all concludes nicely) my personal favourite epic fantasy. It certainly is immerse and addictive reading. To be properly extrapolated and enhanced with review two. In which I shall discuss the plot, the characters and everything Sanderson.
Tweet