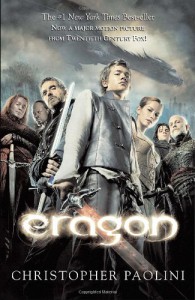 There are a lot of novels out there that are closely inspired by The Lord of the Rings and similar fantasy icons. Some so closely that certain people name them as rip offs.

Eragon is one of those novels that has been called a knock off of Star Wars and Lord of the Rings. However I make a distinction. To me this novel is merely inspired by those tales. There is no direct copying at mind but a mere translation of similar themes and archetypes commonly found in fantasy nowadays.

That doesn't excuse the at times poor writing of the novel but I tend to overlook such things when the story stands out for me. Because despite all the similarities to Star Wars and Lord of the Rings Eragon is a different story and an enjoyable one at that.

Forget the film. That was a terrible production lacking in any proper links to the novel. This novel is a story to enjoy. And in my view the series actually becomes clearly better as the adolescent Paolini develops writing maturity.

You know as I reread this again what struck me was that there were several plot holes, a reasonable amount of deus ex machina elements and a few minor grammatical elements. And yes the story when reading it does sound a lot like Lord of the Rings. However it's not as poorly written as people have stated and even if the first is a knockoff the rest become more individual stories. Not to put too fine an edge on it but most fantasy written now is a 'rip-off' of the Lord of the Rings (which was in itself a 'rip-off' of Norse mythology). And if this is a 'rip-off' its still great storytelling and better than some other fantasy I've read. Plus the writer, youthful as he was, appeals to me because unlike some he is not pretentious and arrogant with his writing. Perhaps Eragon is not for everyone but the least people can do is to try it before judging.
Tweet