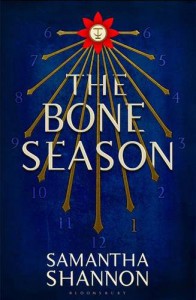 It is fascinating, that considering what has being going on in regards to the topic of censorship here in the online book-reading community, that a novel focused around magic and censorship has caught my heart. I may have read better novels this year, I may have read novels which I enjoyed overall to a greater extent, but this novel in particular had something about it which made it a fresh of breath air. A new, unique concept that I'd not seen explored or at least not seen explored particularly well before in fantasy.

This novel opens in 2059 in an alternate version of Earth, a version where the world is connected to a spiritual realm known as the aether. In this world, in the city of Scion London, the reader is introduced to Paige Mahoney, a clairvoyant. It is gradually revealed that there are many different types of clairvoyants, each with a different ability to affect ghostly spirits (angels, poltergeists and so forth) or the aether. Paige is a dreamwalker, someone who can send their spirity out to directly affect the physical - a kind of telepathic individual - and as such her gift is rare. But, in a vein of form similar to that seen in the X-Men comics, clairvoyancy is illegal in Scion, along with any man made material that is believed to produce clairvoyancy or that hints at clairvoyance.

Yet, not all is as it seems in this dystopian world - and I use dystopian deliberately because I believe the world of this novel is dystopic - and it does not merely become any kind of mystery about gang wars - between the underworld clairvoyant gang that Paige is part of and the others - but instead takes on a deeper and more epic scope. Yet the writing is definite and defined enough to keep a nuanced rein on the world so as to ensure the reader understands what the focus of the novel is meant to be. It is, in essence, a novel that hints at bigger things yet stands alone - working as Paige's story as she discovers and is forced to discover the truth behind her world's setup.

The tone of the world created by the author Samantha Shannon is incredible. For a debut novel, to create such a tone is astonishing in my view. It reads like the work of a far more mature and experienced individual and yet, from the biography, it is clear that this work is not only a debut novel but the work of a younger woman. One can only choose to believe that the tone, setting and characters compounded with the ideas are here connected because this is truly the work of a new talent. A talent to watch with interest.

There are several key themes within the novel such as the fear of the unknown, censorship, the connection between the spiritual and the physical along with two key ideas about belonging and judgement. Paige, for most of the novel, shows a clearly obstinate and rebellious spirit which causes her to easily judge the individuals around her and throughout the novel comes to learn that there is more to understanding someone or a situation than may appear. To that degree she learns about the hidden complexities of life, things hidden far deeper than the physical or spiritual world that she sees so very easily.

This is a work that reminded me of Laini Taylor's Daughter of Smoke and Bone and Rachel Hartman's Seraphina, each of which had similarly strong female protagonists and themes connected to the idea of 'other' and 'self'. However, despite any similarities this is a fresh new work, not one as revolutionary as the genre defining classics, but one which works a more subtle type of transformation on the fantasy genre. And it is most certainly the season to be reading The Bone Season.