Ghost, ghouls and other spirits 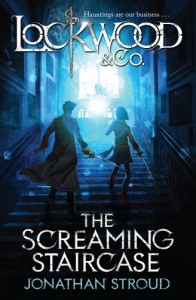 The Screaming Staircase is a young adult novel that works because of the dynamic between the main characters. It is the second novel featuring ghosts and other spirits that I have read in the past week, and it may not be the last that I read for this month, considering that Joseph Delaney's The Ghost Prison is awaiting a pick-up from the library. I mention this trivial detail because it provides the perfect frame as to how it compares to another excellent novel which used spooky themes as part of its premise in The Bone Season.

In each novel the idea of hauntings and ghosts are used differently. In The Bone Season such phenomena are a part of the world, usable by special people who are 'clairvoyants'. This differs greatly from The Screaming Staircase in which the main characters are essentially ghost hunters. They possess a small degree of psychic power, but these psychic powers are directed more toward hunting down the sources of ghostly hauntings. For the ghost hunters work for particular agencies, which are concerned with getting paid to deal with particular levels and variations of hauntings, hauntings which are known collectively as the Problem in this alternate world.

The kind of dynamic created by the pairing of the two main characters - Lucy Carlyle and Anthony Lockwood - is very similar to that seen in Arthur Conan Doyle's Watson and Sherlock. One can only wonder if they were, perhaps, the basis of such a pairing. There's even a third member, George Cubbins, who is somewhat distantly similar to a young Mycroft type (of course I could merely be clutching at straws with that comparison but I do see similarities). It could merely be that Conan Doyle hit on the perfect dynamic for character creation and Jonathan Stroud in writing this novel merely reached for a similar tone.

Lucy Carlyle as a female character, seemingly works for the most part, yet there are patches where I felt that Stroud clearly stepped into sterotyping or reaching blindly for feminist archetypical characteristics such as 'she's a girl and hence more sensitive to emotions etc.' But as mentioned, for the most part she is a character who works to delight the reader and drive the story on, a well-constructed character. Lockwood on the other hand, was clearly intended to be an enigmatic character, which he does not properly become. Instead he becomes a more abstracted and distant character - a kind of absent minded genius. This works for the novel, but does not necessarily fulfil the sense of what he is meant to be. George is, therefore, perhaps the best of the three characters, though lacking in that the reader sees much less of him for the entirety of the novel. His motivations and his characteristics are well portrayed to the reader and his voice is clearly his own particular character voice.

On the whole, The Screaming Staircase is a novel that is good, solid fun and well-crafted. Do not go in expecting a repeat of Jonathan Stroud's other novels, that said, but do expect a generally polished piece of young adult fiction that does what it aims to and weaves in a touch of mystery. The best aspect of this novel is perhaps in that it genuinely delivers a spooky feel, for Stroud's description is superb and delivers thrills and chills aplenty. So if you are looking for a novel of ghosts and spirits for a touch of excitement this might be a novel for you.