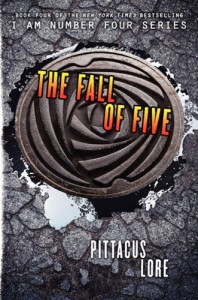 About two books ago in this series, right after reading the first and finding it relatively enjoyable, I discovered that the actual author of this series was James Frey. Having read enough about his exploits as an author, I was turned off enough to decide not to buy any further books. Thankfully, that is, because while the ideas remained decent and far from the worst books out there for teens to read, they went downhill from the promise shown in book one. Or maybe it was simply that my eyes were opened to the reality of the series.

James Frey, it has been said, recently set up a sort of factory for ghostwritters and apparently the original guy he wrote this book with may have been cut out of the writing process to some extent. How true this is, few people know, however, looking into the lies and dishonesty of Frey as happened in the past, does make me err on the side of believing that Frey may be using the ideas of others as he creates this book. Which might explain the good ideas but weak execution.

If you've not read any other books in the series they all start out with the Superman-esque story of aliens fleeing their homeplanet. Only these aliens all have different powers which come from the magic of their homeworld and are fleeing from other aliens, not from an exploding planet. These good aliens are called the Loric and they flee from the Mogadorians and then a bunch of things happen and the books to date become all about the Loric teenagers/young adults all trying to find one another despite the fact that it might be dangerous to.

Now let me say that the way in which this is written generally works. There is typically enough energy, emotion and power in the storytelling to make the book fast and somewhat compelling. But, for all of that, there are too many other times when the book falters, when the illusion is lost and you realise that the characters all feel too much like one another - when the author/s cannot hold onto the individual character voices - or when the phrasing feels weak or clumsy. It is the moments like that, that make you realise that for some of its charms, the book has far too many holes to ever be a good book.

That said, even a bad book with great ideas can be decent enough if read with the right attitude, by the right person or at the right moment. My parents have been enjoying these books (and my Dad is not a keen reader) for instance. However, as a keen sci-fi and fantasy fan I just don't see enough in these books for them to stand out enough as anything other than average teenage, alien stories, with no deep philosophy or subtext like in The Hunger Games or Divergent...