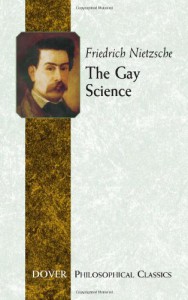 So far in my philosophical venture into the works of Friedrich Nietzsche, I have read both this work and his Beyond Good and Evil. However, while I gave Beyond Good and Evil 3 stars, I feel that this is a better work academically and so give it the higher 4 star rating. In this The Gay Science, many of Nietzsche's key ideas come together in a much clearer manner, and it is easier to understand his views on concepts I feel he lacks more ignorance (religions for instance).

The title of this work stems from the more traditional meaning of 'gay' - that is for it to purely mean 'happy'. In other words this is Nietzsche's examination at times of how science and rationality has come to be considered an ultimately grave and serious task when he believes it should be a happy task or something to delight in understanding.

One thing that I have discovered through reading Nietzsche is that he seems to be someone who has been misinterpreted at times. His statement that 'God is dead', for instance, is a reflection on the fact that in the past Europe had a universal belief in God and now in the current age many people no longer believe in God. His 'will to power' quote was more about the concept of self-determination rather than a concept of war and conquering: the concept that 'what a man can be a man should be.' And further it has often been said that Nietzsche was a nihilist, an Anti-Semitic and a misogynist. The first two can be disproved relatively easily in that in his writings Nietzsche opposes nihilism and writes about humanity as a whole (abhorring racism). His writings on females are...less clear, but on the whole he shows that he respects women at the least.

Part of this misinterpretation is to do with the fact that his Nazi sympathising sister re-wrote his articles and notes after his death to side with Anti-Semitic views and potentially more misogynistic views. The other part, I believe, is due to the fact that Nietzsche does write at times in blindly contradictory ways. For instance his theory of 'perspectivism' is one which states that there are multiple perspectives which can be seen to be correct and that multiple perspectives should be examined on any issue - therefore creating a sense of how existentialism works for Nietzsche. However, Nietzsche outright makes a contradictory exception to this, claiming that the 'herd instinct' connected to already established views, is one to be avoided. He uses this to discredit established ways of thinking according to religions, apparently unaccepting of that fact that man could potentially set out to find the Christian God for him or herself, or that there could be a level of spirituality which supersedes established orders. Further, if we were to take Nietzsche to his absolute conclusion, then it would seem that anarchy should reign...

There is another reason why Nietzsche is so misunderstood, aside from his convoluted and intricate manner of writing. This is due to the fact that his 'theories' are made in the form of truth claims. Nietzsche comes across as extremely arrogant in his writing, though at times humility does seep back in, with his writing conveyed as fact, rather than thoughts and reflections upon different topics. This makes it hard for the critical reader to truly accept or fully respect Nietzsche, though he has many potent ideas to discuss.

Even from my own Christian perspective I accept that Nietzsche was partly right when talking about such ideas as 'God is dead' or the avoidance of following the 'herd instinct' in morality. Yet as I have said before, Nietzsche misses that Christianity could be about more than mere morality or power structures because he only sees the physical abuses of such systems and therefore rejects them entirely. I do believe that God has, sadly, come to appear as dead for much of humanity - though in particular areas his resurrection has become evident - yet I also believe that what Nietzsche cannot comprehend is the spiritual aspect of humanity and that is why religion to him must be entirely rejected.