A Heavyweight of Christian Thought 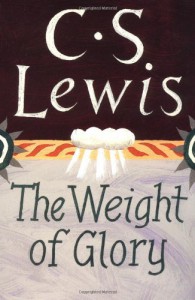 C.S. Lewis' popularity has died in more recent history. Academics accuse him of being too simplistic in his expression (a few that I have read even go so far as to say that he adds nothing to Christian theology), other readers find his style too wordy, preachy or patronising to fully enjoy. I myself, however, love C.S. Lewis' work much like I love G.K. Chesterton and J.R.R Tolkien. He is enthusiastic, flawed and all so human - bridging a divide between the more intellectual academics and the everyman. Or so I believe anyway.

The one great thing about Lewis' work, is that like Chesterton, he is so quotable. But where Chesterton is a far better wit and academic, Lewis is more laid back and grounded - like a humorous and approachable, if sometimes gruff, Grandad. The reason, therefore, that I believe many intellectuals (particularly atheistic individuals) dismiss Lewis' contribution to Christian apologetics is because he speaks with honesty and straightforwardly. This may sound contradictory, considering the way Lewis conducts his phrases - however it seems clear to me that the way he states his intentions is direct. He's not tactless, yet he does not hide his sentences in tact (if that makes any particular sense). To the intellectual who prefers greater nuance and ideas that they can make their own, there is little for them in Lewis' work.

"Do you think I am trying to weave a spell? Perhaps I am; but remember your fairytales. Spells are used for breaking enchantments as well as for inducing them. And you and I have need of the strongest spell that can be found to wake us from the evil enchantment of worldliness which has been laid upon us for nearly a hundred years."

I would define Lewis as a Christian philosopher. After all, philosophy is all about critical thought, and Lewis is nothing if not critical - again perhaps a reason for his loss of popularity is that he attacks established intellectual institutions within his thoughts. Yet he is more a philosopher of apologetics - if such a role ever has existed.

"...it would seem that Our Lord finds our desires not too strong, but too weak. We are half-hearted creatures, fooling about with drink and sex and ambition when infinite joy is offered us, like an ignorant child who wants to go on making mud pies in a slum because he cannot imagine what is meant by the offer of a holiday at the sea. We are too easily pleased."

Yet, for most of this review I have merely been defending C.S. Lewis, not addressing this actual work of his. I will say that if you like Lewis, this is one of the better works of his that I have read. His address on The Weight of Glory is one of the finer pieces that he ever composed, I would argue, and many of the other pieces address similarly interesting and complex issues from the idea of unity, peace and scientific logic v. God. I will have to see how Mere Christianity stands up next to this.

For now I will state this in closing. I believe that C.S. Lewis is someone who should be read by anyone who reads philosophy or books of faith - works that address the idea of Human Nature and the mind or soul. Lewis is by far one of the most down-to-earth and confrontingly direct of all the writers I have tried (in many ways he is the direct opposite of Nietzsche) but he is still one of the more appealing to me. I will never cease to find it of more interest that he came from critical and intellectual atheism to critical and intellectual faith - proving that Christianity need not be faith without thought.

"Christian theology can fit in science, art, morality, and the sub-Christian religions. The scientific point of view cannot fit in any of these things, not even science itself. I believe in Christianity as I believe the Sun has risen, not only because I see it, but because by it I see everything else."