There is a catch to reading this... 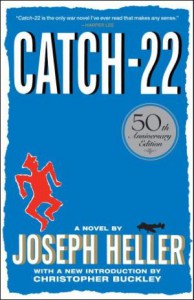 Catch 22 has been so adopted by popular culture that it has become its own phrase in common literature. A phrase meaning a no-win scenario, either because of contradictions or difficulties within a situation. Before I read Catch 22 it had been explained to me that the catch 22 within the novel was that the main character Yossarian, could avoid doing the deadly bomb-runs as a pilot if he was crazy. Only, to be proven crazy he had to fly the missions and if he didn't want to fly the missions then he was completely sane. Of course, within the novel itself, catch 22 is much, much more.

Catch 22 is the call phrase for anyone within the novel to basically trap and enforce a soldier into doing what they want. In other words if they want someone to fly in dangerous missions they have to fly 'because of Catch 22'. And as our protagonist, Yossarian, reflects, no one really seems to know what Catch 22 is, or means, they just use it because it holds an assumed value - that can be used to force people to submit.

So let me quickly address what I really liked about this novel and disliked. Firstly, I liked the fact that out of all the war novels I have ever read, this best provides the idea of how abstract and chaotic war appears to be. Other novels highlight the ordered barracks and the clean shoes and dress uniforms. This novel highlights the dirt and the battle for rank and promotion in a humorous way that is amusing and captivating. Of course, this is also what I did not like about this novel. The chaotic manner of writing and portraying everything that was happening...

It is for this reason - the chaotic, frenetic manner of writing - that I can state I only enjoyed this novel to a lesser degree than others. There were moments that struck me as brilliantly witty, and others that just struck me as purely raunchy and raucous. Still for anyone into war novels I do recommend reading this - just be advised it is a novel that grapples more with the dirty, all-too-human side of war.